The initiatives of Sport under siege

The project “Sport Under siege” begin on June 2004, when, thanks to an appeal to Italian football supporter groups, sports clubs and political collectives, it was organized a fund-raising that allowed the Football Team of IBDAA Cultural Center, in Dehieshe a refugee camp in the district of Bethlehem, to come in Italy and to take part in the 7° edition of the “World Anti-Racist Football Tournament” in Montecchio (RE) Italy.

These young people had the chance to participate for the first time in a International football match from the isolation created by military Israeli occupation.

This important experience of meeting and dialogue between young Palestinians and Europeans gave hope for the future and set the stage to build-up bridges between peoples.

The result, was first of all that all the people involved, started to support the campaign “Sport under siege” and from this we began the project that are going on at this moment. 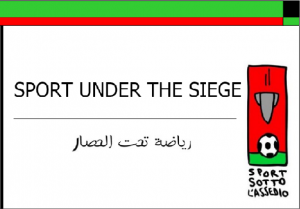 This experience should perfectly blend game, sport and social moments with the discovery of daily life in Palestinian occupied territories, as well as the observer’s attention and active spirit with the sportsman’s brightness and dynamism.

First of all they emphasized about two main things, the experience they gained from this kind of projects, especially interacting with others. They also learned a lot about other nations and cultures. Also they realized that a lot of people all around the world are supporting the Palestinian issue.

We will not forget that playing with others also contributed positively to their capabilities in football and basket ball. We all know that its not just the sport, its how to create a good active humans to make our planet a better place for us all”.

The main objectives of the Project are:

To increase our relationship with the sport organizations and education centres based in all Palestine.

To organize a sport competition in Palestine between the football teams, basket teams and other disciplines, and different European teams.

To involve Palestinian sport teams  to the exchanges that will take place in Italy every year.

Sport as a promoter of peace and solidarity, sport in order to reduce the social exclusion, on favour of education and training to younger.

The next feedback of this project will be journey meetings and contacts with sport and cultural associations in Palestine.

Our convoy will reach those places and communities to spread the universal message of sport and to set the stage for further and more steady cooperation.
Web pages:
www.sportsottoassedio.it
http://player.slideplayer.us/5/1529962/